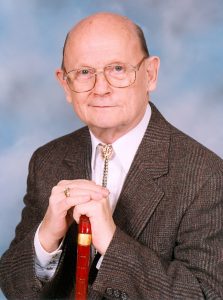 Ray Denney was a Certified Master Watchmaker and Master Jeweler for over 40 years. Traveling salesmen spread word of his skills, and Ray worked in stores in White Hall, Springfield, Pittsfield, and Virden before settling in Jacksonville as a watchmaker at Crawford Jewelers in 1954.

When Ray took ownership of the store in 1963, he was self-taught in the skills of jewelry design and repair. His knowledge of the intricacy and skill required for coiling watch springs and perpetual work towards perfection put in motion his long and increasing skill as a master jeweler. Ray sketched many original designs with his customers, working to create a piece that not only reflected their style and interests, but remained lasting memories for a lifetime. He often thumbed through his book that included photographs of some of his most intricate and difficult pieces. His skills as a true artisan reflected in his attention to detail and his unique designs. Ray’s jewelry skills translated to woodworking and painting when he retired. A jeweler never really retires, however, and occasionally, Ray was called in for consultation or to work on that impossible watch that no one else seemed to be able to conquer. We will always remember watching his fingers move so carefully fixing that long-forgotten watch in its intricacy.

Ray earned the trust and respect of his customers and in 1971 his business expanded to include his wife, Marilyn. In 1976 his son, Shane, joined the business and when Shane became a Graduate Gemologist in 1980, the store was elected for membership in the American Gem Society. In 1984, the store was ready to expand again and moved to the south side of the square. At the time of the move, after more than 30 years in business, Ray and Marilyn decided it was time the business name was changed to Denney Jewelers. In 1992 Ray and Marilyn retired and their sons moved the business across the street into a large art deco building on the Jacksonville square. In 2000, Kevin Denney left the store and Shane and Cathy Denney became the owners of the current Denney Jewelers. Shane and Cathy’s son Brian, daughter Michelle and son-in-law Matthew joined the business in 2002 and 2005 respectively as Denney Jewelers moved into their current location in Springfield.

With over 10,000 square feet of jewelry, 4 full-time jewelers and a staff of over 10 qualified professionals, Denney Jewelers has come a long way from its beginnings where Ray toiled late into the night in his small showroom. Ray was always proud of his store and his family and the gift of being able to merge the two. In memory of Ray, we will always offer the highest quality, workmanship, and service in the industry.

Ray R. Denney Obituary published in The Jacksonville Journal-Courier and The State Journal-Register on July 8, 2010.

He was born October 28, 1927, in Roodhouse, the son of Clarence W. and Flutie Poor Denney. He married Marilyn Harp on October 3, 1948, in Roodhouse; and she survives.

His parents and one brother, Joe Denney, preceded him in death. Mr. Denney was a certified master watchmaker and master jeweler, and was engaged in the jewelry business in Jacksonville for nearly forty years, retiring in 1992. He was a member of Centenary United Methodist Church and the Masonic Lodge.

A funeral service will be held at 11 a.m. on Tuesday, July 13, 2010, at Centenary United Methodist Church in Jacksonville, with Revs. Jean Hembrough and Bill Smith officiating. Private burial will be at Diamond Grove Cemetery. Friends may call after 12 noon on Monday at the Williamson Funeral Home, where the family will meet friends from 6 to 8 p.m. A Masonic service will be conducted at 8 p.m. Monday. In lieu of flowers the family suggests memorial contributions to the Steeple Fund of Centenary United Methodist Church or the Jacksonville Food Center. Condolences may be left online at www.airsman-hires.com.