Oldest bit of Earth is a Zircon 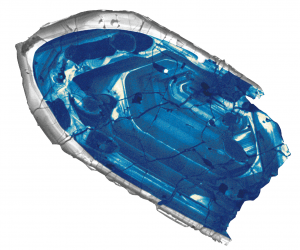 This 4.4 billion year-old bit of zircon is now confirmed to be the oldest piece of the Earth’s crust. Credit: John Valley

A tiny zircon crystal found by geoscience researchers in the Jack Hills region of Australia (view map) has been confirmed to be the oldest found piece of Earth. Using two methods of dating the ages of atoms inside the crystal, the team clocked the mini-gem in at 4.4 billion years old, which is just a mere 160 millions years after the formation of the solar system.

The discovery is leading to new ideas as to how the young Earth may have cooled down from a molten blob much earlier than previous understood. Leading the research was John Valley, a University of Wisconsin geoscience professor who published their findings in the journal Nature Geoscience (read more), reported how they used a technique known as atom-probe tomography to measured the mass of individual atoms of lead in the crystal. This was used as a second, independent measurement that confirmed the more widely-used test of dating through radioactive decay of uranium atoms that also marked the 4.4 billion year dating.

:: Read more from Phys.org and Reuters :: 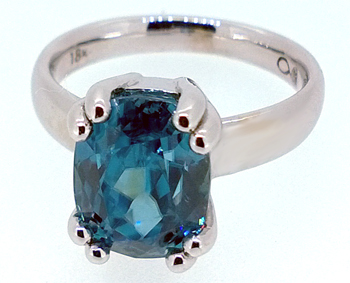 The zircon gemstone is one of the most interesting and prettiest gems as it can be found in a wide range of colors including yellow, red, orange, brown, a variety of greens, and especially a beautiful sky blue. Zircon also displays a surface luster and a sparkle due to the refraction of light that is very similar to these qualities in diamond. The blue zircon is a birthstone for December and can be featured as the centerpiece for stunning jewelry.

Discover more jewelry styles and ideas that we can craft for you from our infinity by Denney jewelry line to feature the blue zircon gemstone … and own a little piece of Earth’s history and beauty.