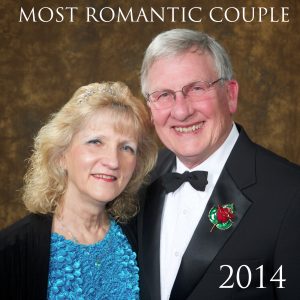 Congratulations to Carrie and Bill, our Most Romantic Couple 2014!

Bill and Carrie were married in June, 1968 at the height of the Vietnam war.  Bill was finishing his Bachelor’s Degree.  Little did they know how hard it would be to find jobs, even with a college degree, due to the huge number of people in our generation.  So on they went through more  years of college…a Masters followed by a Ph.D. in 1976…eight years after they were married and the birth of our only son, Josh, in 1973.  Those years of living on a shoestring budget made them stronger.  They were years of fun and busy times, making friends along the way at two universities. They have been in Springfield since 1977 and live in the first and only home they ever owned.

What is romance?  In Carrie’s words, “It’s 45 years of me not having to make breakfast on Sunday, because he does.  He makes fantastic pizzas.  The only cleaning duty he really dislikes is dusting…he’s the one who steams the floors!  He truly can fix almost anything!  He’s kind and generous and caring.  He’ll back my car out of the garage so I don’t have to do that.  In bad weather, I get dropped off at the door of wherever we’re going.  He’ll go to the store for the forgotten ingredient, even if it’s inconvenient with his plans.  He has the patience of the proverbial “saint”. He’s a wonderful husband and Dad and Grandpa.  I pray that God continues to bless us with good health and happiness for many years to come!” 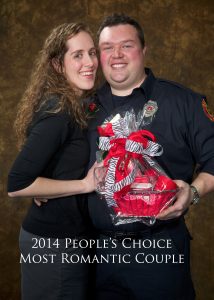 Congratulations also go to Melissa and Jamie our People’s Choice 2014. The People’s Choice winners received a $500 gift certificate and a gift basket. House shopping is tedious and at times frustrating, so when Jamie put an offer down on a house and it fell through, they decided to revisit a house they had seen earlier that seemed to have a lot of potential.  When they went back to the house, they realized how great it was.  Unbeknownst to Melissa, Jamie put an offer on the house the next day.  It was accepted. One night in February 2013 they drove by the dream house, and saw a “sold” sign out front.  Teasingly Melissa said “you bought it didn’t you?”…awkwardness ensued and Jamie pretended to feel guilty about “letting the house slip away”. The day after he closed on the house in March, he took Melissa back to the house, saying the “sale” fell through and they might have a chance at it.  After a lot of nervous and fast-talking, rushing her through every room (because he was video taping), and a very frustrated boy because she wouldn’t cooperate by going upstairs, he finally got her up to the third floor.  With music playing, a heart of white Christmas lights, and a key hanging from the light in the ceiling, Melissa quickly realized he had bought the house and a proposal was soon to follow.  Thank you to everyone who shared their story and voted on our online poll.

We would also like to thank Tony Boston of Superior Sound and Entertainment for providing the music for the evening.  Gene and Sharon Weiser for their dance instruction and Warmowski Photography http://www.warmowskiphoto.com for capturing the evening with outstanding photography.  To view the entire album, please like the Denney Jewelers Facebook Album. Finally, a big thank you to everyone who attended the event and  to all of our finalists and thank you for Sharing the Love.