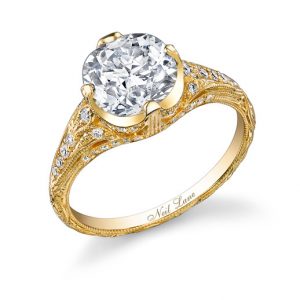 When The Hunger Games star Liam Hemsworth chose an engagement ring for Miley Cyrus, he chose a 3.5-carat cushion-cut diamond ring, handcrafted in 18-karat gold with intricately carved diamond floral motifs in an art nouveau pattern.  The center stone is an antique dating back to the late 19th century.

“It was hand-cut around 1880 or 1890 and it’s unique and in its original form,” designer Neil Lane says. “At that time no two diamonds were alike, as they were all hand-cut, so it’s fascinating to look at because it hasn’t been re-cut to look contemporary over the years. I find that really romantic.”

Lane sculpted the gold setting to fit the shape of the diamond, and set smaller diamonds in the gold to highlight the main stone. “It’s a contemporary design based on vintage aesthetics,” he says. “The light flashes and sparkles no matter where Miley moves her hand.”

The couple were engaged May 31st.