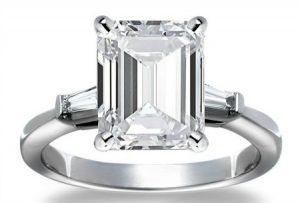 A classic choice, step- or trap-cut stones are often called Emerald cut after its most common application to Emerald gemstones. because that stone is often shaped in this style. Because both the pavilion and crown are comparatively shallow, step cut stones are generally not as bright and never as fiery as brilliant cut stones, but rather accentuate a diamond’s clarity as even the slightest flaw would be highly visible, whiteness, and lustre.

Due to the current vogue for brilliant and brilliant-like cuts, stones that are deep enough may be re-cut into more popular shapes. The step cut’s rectilinear form was very popular in the Art Deco period.  The slender, rectangular baguette (from the French resembling a loaf of bread) was and is the most common form of the step cut: today, it is most often used as an accent stone to flank a ring’s larger central stone.