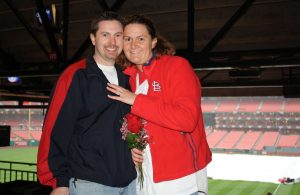 I had never been to a St. Louis Cardinals opening day baseball game and was excited because my now fiancé, Tony, had found tickets for us not only on opening day but for 2 games against the Cubs on opening weekend. He suggested spending the night in the St. Louis area but I decided it would be best to save money by just riding with other family members that were going on Friday and drive ourselves on Saturday. He was in St. Louis on Thursday for a business meeting and sent me a text message informing me that he had won a pair of tickets in a raffle drawing. They were for a VIP Opening Day Breakfast at the Hyatt Regency at the Arch the next day. I could tell he was excited, but I was actually mad because I knew this was going to give him a reason to say we might as well stay for the weekend. By the time I got off work I had calmed down some and just thought it wasn’t worth fighting over. I called him to get more details. He said the VIP manager at the hotel told him it was a special event that only a select group of people were invited to and to make sure I had my camera with me. Not really knowing what to expect, I speculated with my family as to who would be there or what it would entail. We guessed the Cardinals Hall of Famers were the VIPs. We would get to enjoy breakfast with them and get pictures and maybe even autographs. I then began to get a little more excited about what I was telling my coworkers was “some stupid little breakfast thing I have to go to”.

Friday morning came and we were running late when we arrived in downtown St. Louis for the 10:30 breakfast. I was thinking this is typical as Tony is always running late. We better not miss this VIP breakfast! We had to contact the VIP manager when we arrived since this was an invitation only event and he was going to escort us to the proper location. He informed us to meet him on the top floor of the Hyatt. When we got off the elevators, Tony introduced himself to the VIP manager who then asked if I was his wife and Tony promptly said “No, this is my girlfriend, Missy.” He then escorted us to the room, complimenting us along the way that we had the most authentic jerseys of anyone there. He said we were the best dressed couple and everyone would probably notice us. Down the hallway, another Hyatt employee had a clipboard and asked us our name and proceeded to check us off the guest list. We continued to a set of double doors where two more employees opened the doors to an empty room full of empty tables. At the far end of the room, near the floor to ceiling windows that provided an awesome view of the terrace and the Arch, was a table set for two with red roses in the center of the table. I was looking for all these people the VIP manager spoke of and knew we must not be in the right place, but he had stopped at the double doors leaving us alone in the room.

We proceeded out the door at the side of the room to see if the breakfast was through that door. I was even more confused when we found that it just led to the outside terrace where it was raining. We turned around to go back into the original room but we were now locked out! So, we walked back down the hallway to the doors where the manager and the employees were still standing telling them we weren’t sure where we were supposed to go. He pointed us to the end of the room again and said, “It is right there.” I seriously thought the man had lost his marbles because there was no breakfast, no VIPs, and certainly no one stopping to stare at our supposedly “best dressed” attire! 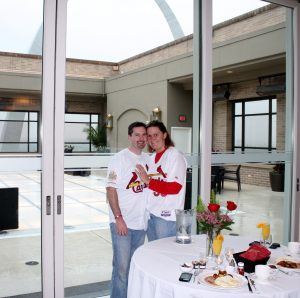 As I approached the table set for two again, completely baffled, Tony said, “I have a question for you. Will you be committed to me for the rest of your life?” Of course I said yes, and then instantly realized something was up and asked, “Was this all a set up?!” With a smile, he replied “Maybe” as he got down on one knee. He asked me to marry him and slipped the most beautiful ring than I could have ever imagined on my finger! After a short embrace and a kiss he pulled out the chair for me and we sat down to enjoy the view of the Arch and the calming rain falling on the softly illuminated terrace floor. The VIP Manager then delivered our delicious breakfast, poured our Mimosas, and left us alone to enjoy the moment that I’ll never forget.
Tony mentioned there was a sign, that the hotel fabricated just for us, located just outside the elevators on the top floor. The sign pointed us in the direction of the VIP breakfast. Distracted by the conversation with the manager, I didn’t see it at that time. When it was time to leave, I took the rose bouquet off the table, so I could carry them with me at the game, and we headed back to the elevators to see this sign I missed. I was disappointed to see the sign was gone. Surprisingly, it was replaced with another sign that read “Congratulations Missy and Tony!” It had a picture of Fredbird wearing a veil and a huge diamond ring on his left wing!

We went down to the lobby. As we walked out the front doors of the hotel, there was a horse drawn carriage waiting for us! I certainly felt like a princess and was enjoying how romantic this had all been, while also appreciating not having to walk to the stadium in the rain. Even though there was a 2 hour rain delay and the Cardinals lost, it was not only the best opening day I could have ever imagined, but one of the most memorable days of my life. 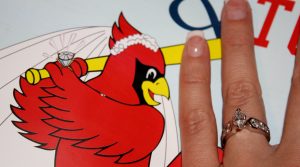 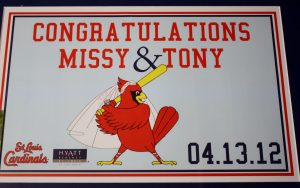