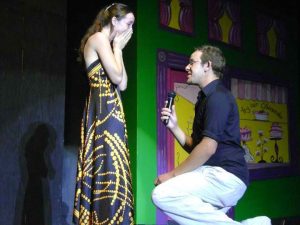 Our romantic story is of our engagement; it happened this past July 3rd 2011. Jeremy my fiancé, got a few of our friends and our immediate family together for what I thought would be a big group date at the Muni Opera, out by the lake for the show Guys and Dolls.

I knew going into the show that Jeremy was going on stage with his friend Jared to wish their mutual friend Nikki, a happy birthday (she volunteers with the Muni), so I didn’t think anything of it. Well about 5 minutes before the show was to start, Jeremy comes running from the back grabs my hand and tells me: “Jared backed out on me and I can’t go up there alone I’m too nervous.” (Everyone around me knows what is going on) my response to him “Um no.. I’m not going up there. That is Jared and your thing, I’m not doing it.”

By that time he had already had me on my feet dragging me behind him. As we were standing back stage all I could do was tell him “I’m going to kill Jared the next time I see him.” (I have horrible stage fright) So then they started the announcement for the show and said “Before we start off the night we have a couple here to wish one of the cast members a happy birthday.” So we go out on stage and Jeremy takes the microphone from the announcer. He starts his speech about how he wasn’t going to let me get off scott-free without coming up there with him.

He starts saying, “So this is the part where I come up here and tell everybody that I’m here to wish a cast member a happy birthday; except that is a total lie. So this is where Casey finds out the truth. On the count of three I want everyone on this side (points to the left side of the audience) to say Casey Backstein marry this man!”

(I was in total shock when he said this)

“Okay 1,2,3..” He holds his arms up to the crowd and they said it- and he says “That is not good enough, how about everyone on this side?” (points to the right side of the audience) on the count of three 1,2,!

After they said it, he continued, “You guys don’t really mean it? Alright how about everybody together… On the count of three, give it all you got; let’s make this the best night of her life, because she has been here, she’s been by my side thick and thin. So on the count of three 1,2,3…” All 200+ people in the audience shouted ” Casey Backstein marry this man!”

Then he said, “Well they are all for it!” and and he asked the crowed, “So is this the part where I get down on one knee? Is this it?”

They all yelled “YES!!” So he gets down on one knee and my hands cover my mouth and I begin to cry and he says to me, “Baby you have been here for me for everything, you are the best person in my life, will you be Mrs. Hughes?”

Bawling and shaking my head up and down I said yes, and he hugged me, and everyone was clapping and yelling; and he says into the microphone, “Kiss me they’re waiting.”

After more laughter, he told he crowd thank you very much and he really appreciated it, and we walked off stage. Backstage everyone knew what was going on before hand they were waiting to take pictures and tell us congratulations. We went back to our family and friends and everyone was hugging and crying. It really was the most romantic night of my life, and because of one of my good friends it was all caught on video.