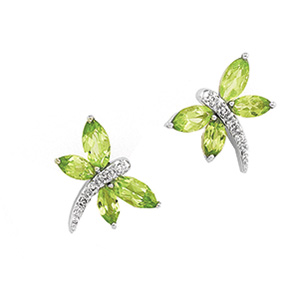 The beauty of peridot, the gem form of the mineral olivine, is a result of extreme conditions. Peridot is found in the rocks created by volcanoes and even in meteors that fall to earth. A few samples of extraterrestrial peridot have even been faceted into gems. Peridot is formed deep within the earth under tremendous heat and pressure.

Peridot is treasured in Hawaii as the goddess Pele’s tears. The island of Oahu even has beaches made out of tiny grains of peridot. Although hawaii’s volcanoes have produced some peridot large enough to be cut into gems, virtually all peridot sold in Hawaii today is from Arizona, another state with extreme geology.

Today most peridot is mined, often by hand, by Native Americans on the San Carlos Reservation in Arizona. Peridot found here is beautiful in color but relatively small in size. Faceted peridot from Arizona is rare in sizes above five carats.

Fine large peridot are found in Burma and large quantities of peridot are also mined in China. In 1994, an exciting new deposit of fine peridot was discovered in Pakistan, 15,000 feet above sea level in the far west of the Himalaya Mountains in the Pakistanian part of Kashmir. Beautiful large crystals of peridot were found, some that cut magnificent large gemstones.

The ancient Romans called peridot “evening emerald,” since its green color did not darken at night but was still visible by lamplight. Peridot was mined in ancient Egypt on an island called Zeberget. Mining was done at night because legend said that peridot could not be easily seen during the day. The island was infested with serpents who made peridot mining a very dangerous occupation until one Pharoh finally had them all driven into the sea.

Peridot later was also often used to decorate medieval churches, probably carried back to Europe by the Crusaders. Large peridots, more than 200 carats in size, adorn the shrine of the three magi at the Cologne Cathedral.

Small cut peridot smaller than three carats are very common and affordable. Gemstones over 5 carats begin to climb in value. Those above 10 to 15 carats are rare, but provide a big and bold look for an affordable price.

Peridot, the birthstone for August, and is said to bring the renewal of springtime to its wearer.