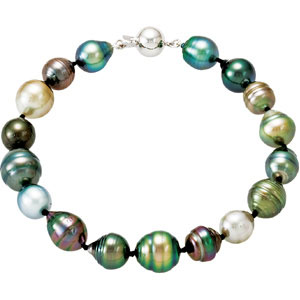 Nothing is as elegant as a simple strand of pearls against a black dress. But cultured pearls today have an exciting range of colors, sizes and shapes that make them ideal for a wide range of jewelry.

Cultured pearls come in many beautiful colors, from palest cream and white to rose, lilac, green, gold, gray, and black. This new pearl diversity is thanks to new producing countries, new mollusks, and new demand from consumers who have made multicolor strands and new styles of pearl jewelry as popular as traditional strands of white pearls.

For the entire span of human history, mankind admired, even worshipped, pearls. In Persian mythology, they are called “the tears of the gods.” In some Muslim legends, the pearl is God’s first act of creation.

According to ancient Chinese legend, the moon holds the power to create pearls, instilling them with its celestial glow and mystery. The ancient Greeks thought pearls were dew from the moon collected by oysters that opened their shells as they floated on the sea at night. Pearls are an organic gem, created when a mollusk like an oyster covers a foreign object with beautiful layers of nacre, the mother of pearl.

Once occurring only by chance, today most pearls are cultured by man. A shell bead or mantle tissue is placed inside an oyster and the oyster is returned to the water. When the pearl is later harvested, the oyster has covered the bead or tissue with layers of nacre.

The cultured pearl industry began in Japan, with Akoya saltwater cultured pearls. A wardrobe classic, these lustrous white strands are still produced in Japan today but they are much more rare, as ocean pollution and the industrialization of Japan has made it more difficult to farm oysters in the coastal bays. Akoya cultured pearls are known for exceptional luster, due in part to the cold waters where they are grown. Today the majority of the cultured pearls on the market, even traditional-looking white strands, are freshwater pearls cultured in China. Most freshwater pearls are nucleated with tissue instead of a round bead. This means the nacre is thicker but it means that most pearls are usually not perfectly round. China also produces freshwater cultured pearls in warm pastel pink, oranges, and purples. Many of the shells used as tissue starts for these pearls comes from very close to home, mollusks from the  Illinois and Wabash Rivers are collected and shipped to pearl fields in Japan!

The popularity of Tahitian cultured pearls has exploded over the past decade. These natural colored pearls are not just black: they are grown in an amazing range of colors, including pistachio, silver, eggplant, green, and charcoal, with shimmering iridescent overtones. Traditionally, pearl dealers had to slowly and patiently collect matching pearls from among the wide variety of hues to put together a matching strand. Today, multicolor strands that celebrate the variety of tones available are also very popular.

The quality of cultured pearls is judged by the orient, which is the soft iridescence caused by the refraction of light by the layers of nacre, and luster, the reflectivity and shine of the surface. Also look for any flaws or spots in the nacre: the best pearls have an even smooth texture. Other factors that affect value are the regularity of the shape, size, and color.

Cultured pearls and natural pearls can be distinguished from imitation pearls by a very simple test. Take a pearl and rub it gently against the edge of a tooth. Cultured and natural pearls will feel slightly rough, like fine sandpaper, because of the texture of natural nacre. Imitations will feel as smooth as glass because the surface is molded or painted on a smooth bead.

Because pearls are organic, they have a relatively low hardness of 2.5 to 3.5 and should be stored away from other jewelry to prevent scratching. Always put on perfume and sprays before you put on pearls, since chemicals may be absorbed into pearls, staining them. Wipe pearls clean with a moist soft cloth.