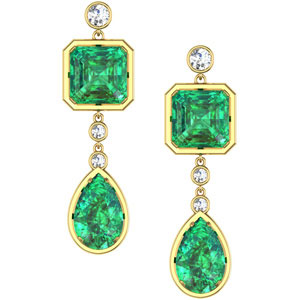 The emerald has been a gem of fascination in many cultures for over six thousand years. It is so prized, that carat for carat, a fine emerald may be two to three times as valuable as a diamond. The timeless appeal of emerald can be summed up in three words written in the year 50 AD: “Nothing greens greener.” Roman historian Pliny the Elder was explaining the desire for the supreme green gem not only in Rome but throughout the ancient world.

Treasured for at least 4,000 years by different civilizations all around the world, emerald is said to quicken the intelligence as well as the heart. Legend gives its owner the gift of eloquence. Emerald is the traditional birthstone for May and the 20th and 35th anniversary stone.

Emerald was one of the first precious stone to be mined and fashioned by the ancient Egyptians, at what is generally accepted to be the world’s oldest source for this gem, an area now called Cleopatra’s Mines.Cleopatra, Egypt’s tempestuous female monarch, was known for wearing emeralds. Mummies in ancient Egypt were often buried with an emerald on their necks carved with the symbol for verdure, flourishing greenness, to symbolize eternal youth.  Because the rich green color of emerald is the color of spring, it has long symbolized love and rebirth. As the gem of Venus, it was also considered an aid to fertility. The emeralds the ancients adored, from mines in Egypt and perhaps what is now Afghanistan, were nowhere near as beautiful as those mined today. The modern emerald bounty began almost five centuries ago when Spanish explorers arrived in the new world. Montezuma presented Cortes with a staggering emerald crystal much larger and finer than any ever seen before.

The Spaniards spent years searching for the source of the fantastic green gems. They found it finally in what is today Colombia. In our century, several more emerald El Dorados have been discovered. While Colombia is still the world’s largest and most famous emerald-producing country, Brazil and Zambia have emerged as major sources for this gem. As could be expected, emeralds from each of these countries possess their own distinctive characteristics. If you are buying mainly or solely for color, Colombian stones have the highest reputation. However, the finest Brazilian stones rival those of Colombia for color. If clarity is your primary concern, Zambian stones are renowned for their crystalline appearance and have a rich, robust green to boot.

Emerald is most often cut in a rectangular step-cut, which is now popularly known as the emerald cut. Smaller sizes are also found in rounds, ovals, pear shapes and marquise cuts. You may have to look a while for an unusual shape in a larger size. Due to their rich color, emeralds are also spectacular when cut in a smooth-domed cabochon cut.

Emeralds, among the rarest of gems, are almost always found with birthmarks, known as inclusions. S ome inclusions are expected and do not detract from the value of the stone as much as with other gemstones. However, you should look to make sure that fissures do not go too deep into the stone so that it might be weakened enough to break if it were hit accidentally. The fissures that are characteristic of emerald are traditionally filled with oil or resin to make them less visible to the eye. You should assume that your emerald has been improved in this way unless it has a laboratory certificate indicating otherwise: such rare stones command a considerable premium.