‘Faces of Eternity’ carved in gemstones 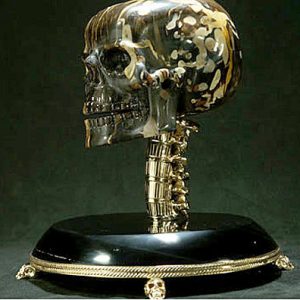 Peruvian artist and master carver Luis Alberto Quispe Aparicio will debut a collection of 15 gem skulls on Oct. 18 at GIA’s (Gemological Institute of America) world headquarters in Carlsbad, CA. The “Faces of Eternity” exhibit, which will be on view through April 2014, was inspired by the juxtaposition of human mortality and the timelessness of gemstones. The intricately carved and polished life-size skulls are made from different large gem crystals and ornamental rock, adding character to each piece.

“The magnificent gems and rocks used to create the skulls, combined with the skill of a master craftsman, give these unique pieces an ethereal beauty. From fossilized whale bone to rainforest jasper, and from pink opal to peanut wood agate, Luis Alberto chose materials from a gem lover’s dream,” said Terri Ottaway, curator of the GIA Museum. “Each skull has a distinctive look and feel to it, making this collection fascinating on both a gemological and an artistic level.”

Aparicio – an engineer by profession and second-generation master in the object d’art – merges sculpting and jewelry fabrication techniques, creating unusual design work that is distinct from traditional European carvings. Along with his sister, Sylvia, he has helped to revive Neoart Peru, a family-owned company started in 1975 that specializes in ruby carvings and focuses on natural wildlife-inspired themes using rare and unusual gemstones from around the globe.

“The skulls collection was one of my favorite to create. By carving natural gemstones with a combination of lapidary art and metalsmith techniques, you can really see how the colors and textures in each stone brings each piece to life,” said Aparicio.

The complete collection is comprised of 26 pieces, each hand-carved from gemstones sourced from around the world and complemented by parts in silver and gold vermeil. The collection was designed and carved over the period of one year. Fifteen pieces make up the “Faces of Eternity” exhibit at GIA in Carlsbad, while the remaining pieces are in private collections in France, the U.S., the U.K. and Russia.

Pieces exhibited are on loan from Luis Alberto Quispe Aparicio. “Faces of Eternity” will be on display from Oct. 18, 2013 through April 2014.