Alexandrite – The Magic of Science 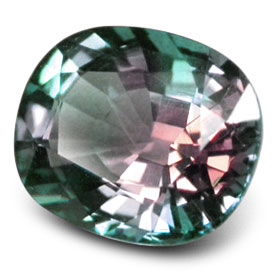 One of the birthstones for June, Alexandrite is a rare and beautiful gem. If you love magic, especially the magic of science, you’ll love alexandrite, the color-change gem. Outside in daylight, it is a cool bluish mossy green. Inside in lamplight, it is a red gem, with a warm raspberry tone. You can watch it flick back and forth by switching from fluorescent to incandescent light.

A lexandrite is a gem variety of the mineral chrysoberyl discovered in 1830 in Czarist Russia. Since the old Russian imperial colors are red and green it was named after Czar Alexander II on the occasion of his coming of age.

How does the color change work? Most gems transmit and absorb light throughout the visible spectrum and we interpret the mixture of the transmitted wavelengths as the gem’s color. Alexandrite transmits light only in two discrete windows of the spectrum, in the blue-green and red regions. The rest of the spectrum is absorbed. When viewed under light sources active in those particular regions of transmission, you see one of the two colors. In daylight, or in artificial light that simulates it, like fluorescent light, light waves in the green region predominate. In candlelight, or artificial light that simulates it like incandescent or tungsten light, light waves in the red region predominate. The gem is displaying changes in the light, not changing itself.

Today, fine alexandrite is most often found in period jewelry since newly-mined gems are extremely rare. You’ll see fine gems offered at auction with impressive estimates. The original source in Russia’s Ural Mountains has long since closed after producing for only a few decades and only a few stones can be found on the market today. Material with a certificate of Russian origin is still particularly valued by the trade. Some alexandrite is found in Sri Lanka and Zimbabwe and Brazil but very little shows a dramatic color change. For many years, alexandrite was almost impossible to find because there was so little available.

A photo can never do true Alexandrite justice.  Denney Jewelers is pleased to be able to offer our customers some amazing Alexandrite samples.  Come in to see one of the rarest gems in the world.